Government spending will grow unless politicians get incentive to change.

The Federal government spent 3.7 times as much per person in 2011 as it did 50 years ago in 1961 when Democratic hero JFK was in office (adjusted for inflation). If Kennedy were around to propose his level of spending today he'd be denounced by the mainstream media as a radical extremist.  They propose growing spending even more rapidly in the future, and revenue won't keep up.

Our government was designed around "checks and balances" that work to control many things, but not apparently not spending.  Politicians get elected by promising to spend on programs. There is no reason to expect the results to change unless we change the incentives. "Pay for performance" works in the private sector, its time to consider applying proven techniques to politicians and government employees, e.g. a bonus for spending cuts. In the case of elected officials perhaps they'd be collected only if reelected to confirm voter approval. Even if you disagree with that approach,  consider learning more about the problem here in this new article on the main site: Government spending is out of control. at http://www.politicsdebunked.com/article-list/federal-spending

Much of the public doesn't realize that spending has on average grown steadily for decades. So please pass this on to everyone you know. Even if your friends are aware of the issues, perhaps friends of friends aren't . The major media usually doesn't inform people well about such things, the only way for them to learn is for *you* to spread the word.
Posted by Politics Debunked at 9:21 AM 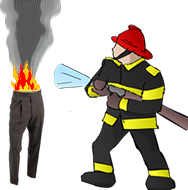